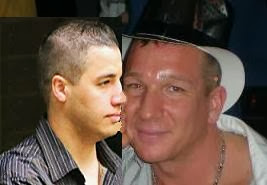 Hoop there it is. The publication ban must be lifted because Kim Bolan is confirming earlier reports that Michael Le from the Surrey Six has pleaded guilty to conspiracy to murder Corey Lal only. First degree murder charges have been dropped. Another deal with the devil. Kim Bolan is reporting that Prosecutor Mark Levitz said in his opening that Le and Bacon ordered the murder of Lal because he had refused to pay a $100,000 tax to the Red Scorpions. Which was obviously for the Hells Angels not the Red Scorpion but we won’t get into that. Much.

All we know is that James Riach from the Independent Soldiers, a Hells Angels puppet club, met the Bacon brothers at Castle fun Park December 2006 before the Surrey Six which was on Oct. 19, 2007. We know that Larry Amero was partying with the Bacon brothers all along not just when he was shot with Jonathon in Kelowna. That’s what we do know. Looks like Jamie Bacon is going down for the Surrey Six. Let’s hope Larry Amero and Spike goes with him.