CBC is reporting that Kyle Halbauer from the Whiteboy Posse has plead guilty to cocaine trafficking and the first-degree murder of Lorry Santos. In his plea he claims they got the wrong house and shot her by mistake. In the heart. However, when the story first hit the news it was reported that the 34 year old woman answered the door not that she was shot on the way to answer the door. This caused local speculation that it was a hate crime in harmony with the Whiteboy Posse’s neo-Nazi beliefs. 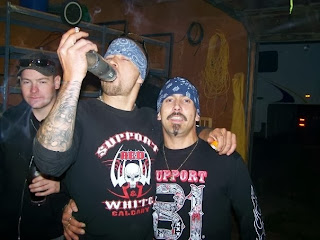 Posted by Dennis Watson at 9:27 AM