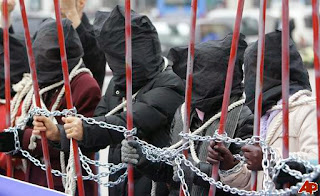 On the political landscape, the Vancouver Province reported that North Korea executed 80 people for watching foreign films. It was a small article buried in the paper yet the ramifications of it are absolutely astounding. It’s surreal. It’s almost unbelievable. It’s inconceivable.

The article quotes a South Korean paper which claims the 80 public executions took place in seven separate cities in North Korea and in one case a large number of civilians including children were forced to watch. Family members were sent to prison camps.

Canada did participate in the Korean War. They helped prevent North Korean from invading South Korea and committing those kinds of atrocities in South Korea. I realize that people are very polarized about religion but imprisoning someone for their religious beliefs or lack there of is absurd. It violates civil liberty. Executing them for either is Hitler and Stalin déjà. It’s hard to conceive that the world would allow that in our modern age.

Another one of my pet peeves is their recent insanity that the Harper government is spamming the public with. They are complaining about something Justin Trudeau said that could possibly be interpreted as an indifference if not support of China’s dictatorship. I just find it insanely hypocritical that they would dare raise the issue to promote their political party. They are the ones that gave Communist China our oil rights.

Every time we fill up with gas at then pimps we are financing the military expansion of a Communist dictatorship. Anything that Justin Trudeau could have possibly said in a talk is nothing compared to the treasonous support of that same dictatorship the Harper government has displayed by giving them our oil rights. That is one decision that needs to be reversed right now. China is the ones supporting North Korea’s insane violation of human rights. Likewise china has a similar history of inconceivable violations of human rights.

We cannot in good conscience support any of that. It mocks everything we stand for. This also opens up the door to claims that China Admits to Organ Harvesting. Soemthing that ties in with BC organized crime.