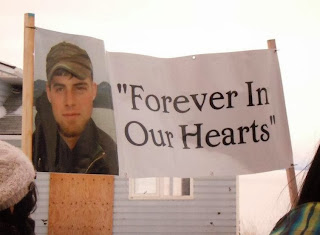 Eileen Bjornson is reporting that four people have been arrested in her son's murder and that the police will be holding a press conference about it on Monday. Fribjon Bjornson was found dead and tortured February 2012. There are some disturbing claims about the case that I have not yet reported. We'll wait to hear what the press conference reveals.

The Globe and Mail is confirming reports that he was fond decapitated. However, there were reports of other indignities to human remains as well. The Prince George Citizen is reporting that CBS's 28 Hours claimed a connection between Bjornson's death and the May 2011 disappearance of fellow Vanderhoof resident Madison Scott.