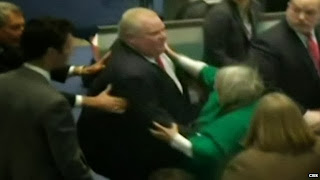 Rob Ford and his brother turned Toronto city council into a bizarre WWF circus. During the insanity Rob Ford pushed past an older female city council member and knocked her down. This brazen bullying has to stop. Rob Ford is an anti Christ.

The ruckus erupted after City Counsel voted to reduce Rob Ford’s budget. He is not fiscal responsibility. That is a lie. He is wasting money with his insane illegal activity. I haven’t been writing about this clown because I didn’t want to give him the attention he so desperately craves. His latest foot in the mouth was denying a staffer’s claim he wanted to have oral sex with her. His claim about getting enough at home is rather unlikely since the police were called to his home after a domestic assault. He admitted he and his wife were having problems but they were staying together for the kids sake.

When his wife stood beside him during his apology for the oral sex comment she looked like a battered wife. Rod Ford is a devil. He is completely out of control. We need to calm down and stop his bullying. The right needs to find another candidate. That’s all there is to it. Cut him loose. 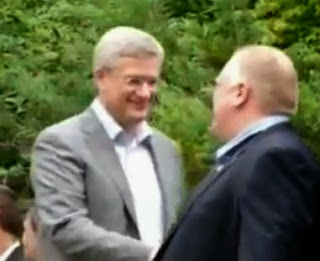 Thestar.com is reporting that the months-long, ongoing police investigation of Mayor Rob Ford, dubbed Project Brazen 2, has netted two more arrests of suspected drug dealers. There's a lot more I'd like to say about this but can't. I will simple ask Why is it that all these associates of Rob Ford keep getting busted for drugs but he doesn't. Think about it.