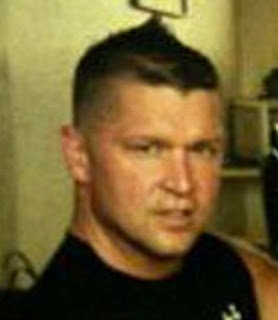 Speaking of domestic abuse, recently we heard that Don Lyons was charged with assaulting his girlfriend. Turns out he’s been sentenced to 30 days in jail and three years probation for uttering threats. It’s a ‘k’ file indicating the victim was family or spouse.

So what is with that? Big strong guy threatening and beating on his girlfriend. Is that a roid rage or just another piece of sh*t woman beater? After all they are a dime a dozen. Maybe it’s just another fro ho like his buddy Donnie McWhirter who was also convicted of assaulting his girlfriend and is also a member of the Kelowna Independent Soldiers. Fro hos of the world, repent.

Like we said, he who loveth his wife, loveth himself. He who beats his wife or gf has no self respect. In the words of Offspring, he is a dweeb. He’s just a guy with low self esteem. It’s sad. Really. Rather pathetic actually.