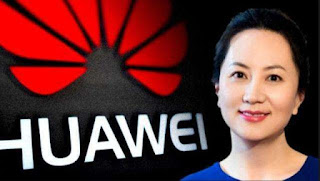 The Globe and Mail is reporting that "A judge presiding over the extradition hearing of a Chinese executive being sought by the United States says the fraud charge against Meng Wanzhou is unusual. No one lost money, the allegations are several years old, and the intended victim, a global bank, knew the truth even as it was allegedly being lied to."

We all know that the arrest of the two Michaels had nothing to do with anything they did. It was a tit for tat move in response to the arrest of Meng Wanzhou. The CCP has the mentality of a child. A spoilt brat that craves attention and power.

We need to remember that sanctions against Iran have nothing to do with terrorism. It's about oil. England and the United States have a long history of meddling in Iranian politics to profit from their oil. The war in Syrai has nothing to do with terrorism. It's about rival pipelines. One from Quatar and the other from Iran. Selling Iran or anyone else nuclear reactors so they can make nuclear weapons is unwise. Yet these sanctions are not fair or justified.

China has a right to sell Iran cell phones. The arrest of Meng Wanzhou is simply part of a trade war. It has absolutely nothing to do with justice. As I previously said, under Obama, the US was considering selling Iran nuclear reactors. Trump comes along and rightfully pulls the plug. However, an agreement was already in place. Once the US pulled out, England took over.

England is allowed to sell Iran nuclear reactors but China is not allowed to sell them cell phones. That is completely insane. England has since voluntarily pulled out of the deal but the double standard remains.

We should always take the higher road regardless of the CCP's childishness. We also need to examine the outrageousness of the double standard. We should be a lot more concerned about the political prisoners the CCP is executing then them selling cell phones in competition to ours. Big tech is no better than the CCP. They are the same thing. They both covet profit, power and control. Corporate Communism is Communism. Both roads lead to the same place. Corporate monopolies are bad. The free market is good.