Spike: The King is Dead, Long live the King 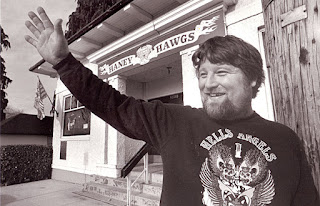 I've received a confirmed report that Spike, the chapter leader of Haney is dead. My condolences. I know he had recovered from cancer a while back. Perhaps he had a relapse. I'm also aware that Jesse has been taking over for him in the club.

As I have said. I don't have a problem with Jesse and I don't have beef with Spike. At least Spike rode. I realize that Haney Hawgs is all about the Red and White and they also sell Hellside gear which is the new chapter in Edmonton. I don't like them, but I'm fine with Spike.

That's not to say that I agree with all of their businesses because I don't. As long as they stay on their side of the river, their business is their business. Edmonton is f*cking with my crib just like the Cub pack freaks. I don't like them. Edmonton are trouble makers and the Cub Pack don't even ride. They just sell drugs. Turns out Deli from Saskatchewan has sent his condolences. Deli's not a bad guy. For a crack dealer. As the House of Pain would say, get off the crack and sing a new tune like boom shakalaka boom. As for Spike's family, my condolences.