The Globe and Mail is reporting that "Police in Kelowna, B.C., have cordoned off an area surrounding a two-person shooting following the discovery of what is believed to be an undetonated explosive device." This is another shady part of the story.

The same group that is trying to demonize Kyle refused to arrest Arnie Miller. This isn't Quebec. Here in BC the gangs aren't blowing each other up. Yet. That's what made the RCMP's discovery of fake pressure cooker bombs in the Craig Latimer arrest highly suspicious.

In the Quebec biker war, they would use dynamite from construction sites to blow each other up. That was realistic. Pressure cooker bombs are not. The only people who know how to make those are US intelligence. The Surrey pressure cooker bomb plot was fake as f*ck - entrapment.

It's like the discovery of grenade launchers in Ontario. Those have no practical application in the street. They are great in times of war when you have a line of enemy soldiers attacking. Yet they are not effective for targeted hits. Even if they wanted to take it to the next level and blow someone up like back in Ireland, they would plant a bomb in the person's car. Not throw a grenade in their general direction that would result in unacceptable civilian causalities.

81 grenades was just a little too suspicious to be believable. 81? The same number that represents the Hells Angels? Why grenades and not dynamite? Grenades could only come from military sources and must have been provided by police agents just like the Surrey pressure cookers were. The RCMP's terrorist quota crew. 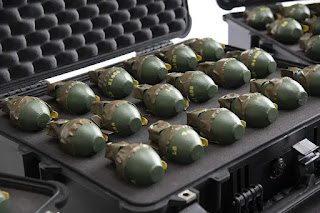