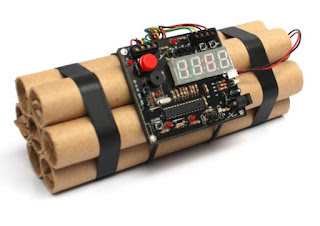 Update: One reader states that there were two bomb claims, one real one not. The West Kelowna claim turned out to be a battery pack but the downtown shooting one was real. We need a little bit more information as to exactly what kind of bomb it was and who gave it to them. The CFSEU are the ones assisting Kyle's shooters. If they gave them a bomb like they did in Surrey, they need to be held accountable for that.

The Kelowna Now is reporting that "West Kelowna Mounties have disposed of a device they thought might be a bomb. It turned out to be someone’s attempt at a homemade battery pack, police said, but residents in the Cameron Road area were still evacuated as a precaution."

"The RCMP said the device was not connected to the shooting and discovery of an explosive in Kelowna on July 31. Police in West Kelowna found the battery pack while visiting a home in the 2600 block of Cameron Road as part of an ongoing investigation."

“Examination of the device determined that it was someone’s attempt at a homemade battery pack, however it was unstable and potentially dangerous." We saw in the Castanet video the shooter tossed something. I'd like to know what that was and who gave it to him.

The bomb squad was at the scene. After the suspected bomb was detonated in a safe location they said "We can now confirm that this was a viable explosive. Based on our examination, this device had the potential to cause significant damage to property and seriously injure members of the public that evening." We need more information about this.