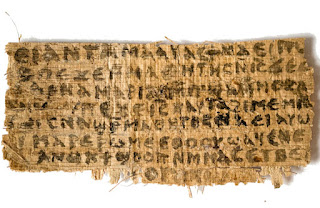 Recently Dinesh D'Souza put out a video about how Harvard Is Promoting a Lie About Jesus' Wife. Last year, CNN, the Fake News Network reported on How a mysterious man fooled a Harvard scholar into believing the ‘Gospel of Jesus’ Wife’ was real.

I have to admit the text on the papyrus looks somewhat ridiculous. Papyrus was used by the Egyptians and that isn't Egyptian. It doesn't even look Coptic although that is what it claims to be.

I'm going to talk about the concept that Born Agains fear and compare it to the belief that Catholics hold about Mary. As I have previously said, the movie the Da Vinci code proposed the theory that Christ was married and that Mary Magdalene became his wife. They did not get that idea from this manuscript. They got it from others. The fear that some have is that if this is true then their religion is false. Not so. If Christ was married that does not change his divinity.

There was another movie called the Last Temptation of Christ. It was straight up slander. It portrayed Christ as a sinful man. However, if Christ was married, that would not make him sinful. In the Catholic church, Priests are single. In the Protestant church ministers are married. Marriage is ordained of God. Catholics believe in the virgin birth. So do Protestants.

People have the right to believe whatever they want. I'm just saying that many believe that if Jesus came today and taught the same things he taught back then, the Christian church would crucify him all over again. Just sayn. Regardless, how we live our life is far more important than what we profess to believe. Actions speak louder than words.