BC has highest overdose deaths ever under NDP Mismanagement 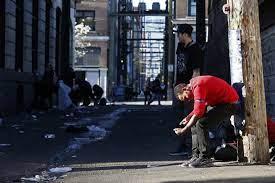 The results are in. Last month BC had the highest overdose rate in history proving to the world that the NPD’s model doesn’t work. The problem is that Vancovuer adapted the Four Pillars then threw away three of the crucial pillars turning harm reduction into harm promotion. Clearly the lethal injection site isn’t working because it has created more addicts and more fatal overdoses.

Once again we see the problem, reaction and bad solution paradigm at work. Vancouver’s drug problem is like LA’s crime problem. It’s the result of failed liberal policies. Instead of saying hey look, the NDP is obviously screwing this up, the liberal media is calling for a safe supply of illicit drugs at the taxpayers expense. Oh the cunning plan of the evil one.

You can't get an MRI or cancer treatment but you can get free heroin. That satanic plot will bankrupt our public medical system faster than you can say organized crime. The Portugal model succeeded because they made treatment mandatory. The liberal extremists refuse to tell you that part because they have an agenda. Reducing addiction and saving lives is not part of it.

Kennedy Stewart has become a Sith Lord. Like Snoop dog said, clean this sh*t up .