The Tiger Dam in Abbotsford went across the 401 freeway 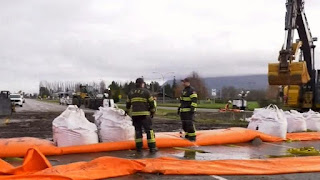 We all heard that they built a dam in Abbotsford to prevent flood water from going onto the 401 freeway and we were like good on them. At first, I thought damming the Sumas river is a bit problematic because that would create another lake but at least then you could control the flow of water. However, that's not what they did. Today Global showed video footage of them dismantling the temporary dam. The dam they built went right across the freeway it was supposed to protect. The dam was blocking traffic. This level of stupidity is one for the history books.

The problem was the dike and the pump. The dike broke because it was .6 meters below design and the pump couldn't keep up with the extra water. Instead of shoring up the dike and adding another pump, they completely blocked the 401 freeway. I can't make this sh*t up. 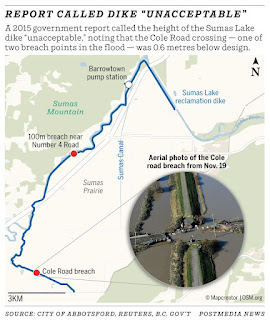 All they needed to do is put a second pump at the Barrowtown pump station. They still need to do that. Failure to install a second pump and shore up the dike is criminal negligence. When you sandbag or shore up a river you shore up both sides of the river not one. This Tiger Dam was simply a theatrical production. Once again we see that the NDP is NFG.