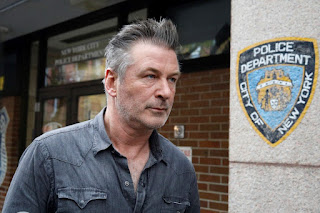 The BBC gave a prelude to Good Morning America's offensive and ridiculous interview with Alec Baldwin after his accidental murder of Halyna Hutchins on set. The headline reads "Rust: Alec Baldwin says he didn't fire gun on film set." AYFKM?

The BBC article states that "Alec Baldwin says he didn't pull the trigger of the gun that fatally wounded cinematographer Halyna Hutchins on the set of his film, Rust. The star made the claim in his first sit-down interview since the incident in October. 'I would never point a gun at anyone and pull a trigger at them. Never,' he told George Stephanopoulos of ABC News."

"Ms Hutchins was shot and killed as Mr Baldwin rehearsed with what he believed to be a cold - or safe - gun on the set of Rust in New Mexico. It is believed to have discharged when he removed it from a holster during rehearsals for a forthcoming scene."

The gun was in his hand when it went off. He broke all four of the most basic and important rules of firearms safety. He said he would never point a gun at someone and pull the trigger. Yet that's exactly what he did. There's no way of getting around that.

The main stream media loves Alec Baldwin because he is anti-gun and anti-Trump. I'm sure Colion Noir will have something relevant to say about Baldwin's recent interview but while we wait for that, I will point out the obvious.

Alec Baldwin claims that the gun went off as he drew it from the holster. Yet it was in is hand when it went off so he had to have pointed it at her and he had to have his finger on the trigger. I think he's lying. If he was wearing a shoulder holster that would have been theoretically possible but he wasn't. It was a western. He was wearing a side holster. That means when he drew the gun, it didn't sweep across an unsafe direction. If the gun went off when he drew it from the holster, it is theoretically possible he could have shot himself in the foot. People who are inexperienced with guns have done that before.

I say mistakes plural because he made more than one mistake. He broke all four rules of gun safety. He did point a gun at someone, he was not aware of what was behind his target, he did have his finger on the trigger and he didn't check himself to see if it was unloaded. He broke all four of those rules and he needs to own that.

As far as the claim that the gun went off when he drew it from the holster, some semiautomatics can have sensitive triggers. The Glock has a safety built right into the trigger. If you bump the gun, it won't go off unless you actually pull the trigger.

However, the gun Alec Baldwin fired was a colt .45 revolver, it was not a semi-automatic. It was a single action revolver. That means you have to manually pull the hammer back before the trigger will work. That means having an accidental discharge as he draws the gun is highly unlikely. Impossible if your finger is not on the trigger. It doesn't go off all by itself.

Colion Noir already explained how Alec Baldwin broke the four carnal rules of gun safety. Colin also talked about Alec's ridiculous request to have police officers on set wherever firearms are used. The cop's not there to baby sit him. He's not there to say don't point that gun at anyone and keep your finger off the trigger. That was Alec's responsibility. You can't have cops on every set just because you're an idiot who has no idea what you're doing. Again, this is all about finding someone else to blame instead of admitting he made a mistake.

The court case against Alec Baldwin has two elements. First is the indisputable fact that he broke all four rules of gun safety. The other is the fact that gun safety was an ongoing concern on that set. That's why there was a walk out the morning before the fatal shooting. Those two elements are indisputable. Not even the fake news can spin that.