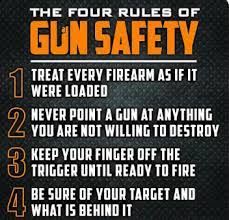 There has been a lot more talk about the accidental discharge on the movie set of Rust where Alec Baldwin fatally shot a cinematographer. Rebel News recently posted an interview with a gun specialist with movie experience and so did Real America with Dan Ball.

I was going to make two comments and will do so now. There are two things we learn in Canadian gun safety. The first is to always assume the gun is loaded. If someone hands you a gun and tells you it's unloaded, you are required to check it yourself to make sure it is unloaded. That's the same thing Dan Ball's father taught him when he was a child.

We have other rules like finger off the trigger and control the muzzle but the other comment I wanted to make is that we are taught to never point a firearm at someone. Ever. We always have to make sure the muzzle is pointed in a safe direction. The Americans have the same rule they just word it differently. The Americans say never point a firearm at anything you don't intend to kill or destroy. That applies to hunters and firearms used in self-defence.

As I previously said, someone is going to take the fall for Alec Baldwin and today's scape goat is a 24-year-old armorer on her second movie. The specialist in the Rebel News interview discussed the pressure directors put on armerors to cut corners. This young girl could have been easily intimidated. Since the crew had a walk out over gun safety that day, the directors bear the burden of responsibility for the lack of gun safety on set. He knew she was new.

Alec Baldwin should have checked the gun and should not have pointed it at anyone. He and the director bear the burden of responsibility for this tragic accident. Blaming the kid is a shameful disgrace. The Hollywood Reporter interviewed the staff that walked out before the fatal accident and confirmed the directors were insistent everything was rush rush rush.

Lawsuit: Baldwin had no reason to fire in 'Rust' shooting