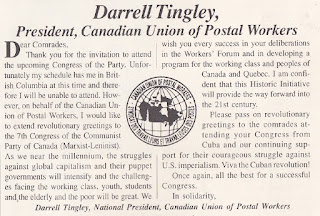 I found the letter Darrell Tingley had published in the April 5th 1998 edition of the Marxist Leninist Weekly as well as the letter he sent me in response to my concerns. I've already explained the background to this. I just wanted to post the documents to verify what I wrote.

Darrell's letter was published right beside Jean-Claude Parrot's letter who was the President of CUPW before Darrell during the forced merger of the two Unions. JC Parrot was well respected. He went on to become the vice president of the Canadian Labour Congress from 1992 to 2001. I see that JC Parrot just resigned as the president of the National Organization of Retired Postal Workers on March 1st 2021 at the age of 84. Darrell didn't rise to the same stature after his electoral defeat and died with his boots on as a true soldier should on the work floor.

I didn't hate Darrell. I knew some of his supporters in the Fraser Valley West local and I respected them. Darrell and JC were both Communists but Darrell was a bit more paranoid and extreme. Don't get me wrong. He was sincere and trustworthy. You knew where you stood with Darrell because he was in your face. He wasn't like these other spineless politicians who would smile at your face and stab you in the back. If he didn't like you, he told you to your face. I respected that.

It's just that I found all this Revolutionary Communism rhetoric batsh*t crazy. It was all very new to me. At first, they accused me of McCarthyism. At the time I didn't know what that meant and had to look it up. McCarthy accused everyone of being Communist. Darrell certainly didn't hide it. McCarthy claimed the CIA had been taken over by Communists. Well he was right about that. Lee Harvey Oswald worked for the CIA. When he was arrested for the assassination of JFK he boldy declared that he was a patsy so they executed him before he could go to trial.

Paul Bourget told me that Bill Finley was a devote Catholic. He came home from a heated argument about the merger and said he hated that damn Communist. He was referring to Darrell. I laughed out loud when I heard that. I could see those two fighting about policy. The LCUC guys would always sign their letters Fraternally after the motto of the French Revolution. When I started doing that the CUPW guys freaked. They always signed their letters in solidarity and I found that a little too far left for me. Their definition of solidarity was anything but inclusive. Kinda like how the HAs say L&R before they kill you and rob you.

As I said a lot of the Communists in CUPW were idealistic. They for the most part believe in the kind of Communism that has never existed yet. IMO their obsession over Cuba was a step backwards. When I hear the word Communism, I think of the murders of Mao, the Gulag and the Berlin wall. There is no democracy, there is no civil liberty. Only slavery and oppression. That is what we are seeing now infiltrate our governments.

The Communists in CUPW always saw the big corporations as the enemy. They were the oppressors they resisted. Yet now all of a sudden big Pharma is good? I think even they can see, when the rich fund Communism it's not to share their wealth. It's to increase their wealth by high jacking it like Lennin did. That is something we can all unite to oppose. As I told Evert, Cuba isn't the best model of Socialism that we have, the Kibbutz movement in Israel is. IMO true Socialism can only exist within the parameters of a Free Republic where civil liberty is protected by law. Without that, Socialism is just another word for slavery.