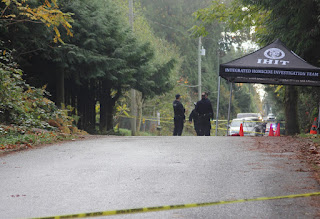 The Vancouver Sun is reporting that "A 57-year-old man has been shot and killed in Maple Ridge on Monday night. The victim was found wounded in a white GMC pickup truck. Officers attempted to save his life but were unable to. The Integrated Homicide Investigations Team (IHIT) has taken over the investigation. The Ridge Meadows Serious Crime Unit is assisting."

The Indo Canadian voice is reporting that "THE Integrated Homicide Investigation Team (IHIT) on Tuesday identified the victim of the shooting on Monday in Maple Ridge as 57-year-old Daniel William Delmark of Maple Ridge." He is not known to the police.