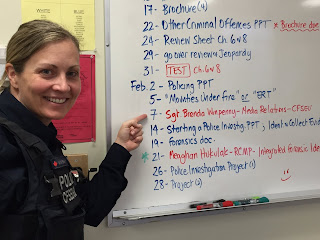 Since Kim Bolan is phasing herself out before retirement, the CFSEU has hired a new spin doctor to represent them in the media. It reminds me of how they used Catherine Gallagher in the media to cover up their misdeeds during the Pickton Investigation.

Long before Suminder Grewal’s murder, the CFSEU launched a rat out your rivals program and paid Hells Angel associates to rat out their rivals. Ever since then they stopped makeing Hells Angel drug busts in BC. This new drug bust was the result of a year long investigation.

Blaze is the root of the problem. He is the head of the rat pack and is a compulsive liar. The fact that they hired him shows they have no integrity and no desire to stop crime. They just want to throw out a few press releases so they don't get privatized.