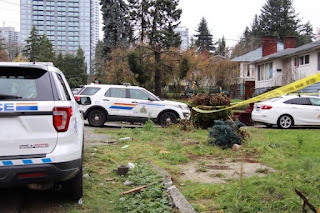 The Abbotsford News is reporting that "Three shootings in Whalley in as many days have left three victims injured, one critically so. Surrey Mounties says they all appear to have been targeted but not related to one another. Police are exploring links to the drug trade."

"The first shooting happened at 5:13 p.m. Saturday in the 13300 block of 95A Avenue. A 58-year-old woman was shot in a driveway and taken to hospital with injuries that weren’t life-threatening."

Update: CTV is reporting that "A shooting reported in Surrey, B.C., earlier this week is now a homicide investigation following the death of the victim. Officers found the injured victim inside a home on 137 Street early Monday morning."

"The 45-year-old, who has not been publicly identified, was described as having life-threatening injuries at the time. He was taken to hospital where he died the next day. As a result, the Integrated Homicide Investigation Team has taken conduct of the case. The fatal incident was one of three unrelated shootings reported over the weekend in the city."