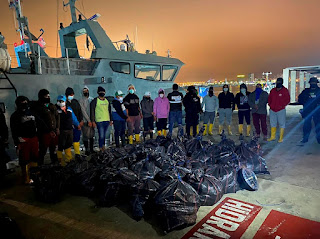 Reuters is reporting that "Military and police authorities from more than 40 countries across Europe and the Americas confiscated 145.3 tonnes of cocaine in the eighth phase of Operation Orion, a multinational naval operation against drug trafficking, Colombia's navy said on Monday."

"Some 575 people of different nationalities were captured during the campaign, which ran between October and November, Colombia's navy said, adding that 49 vessels were immobilized, as well as six submarines and three planes."

Posted by Dennis Watson at 3:04 PM