Kyle Rittenhouse is a Hero

I just want to say that Kyle Rittenhouse is a hero. He's a young kid on trial for shooting some rioters and looters in self-defence. The whole partisan misrepresentation of this case once again shows what's wrong with the current administration. He used a firearm in self defence against violent criminals. He shouldn't have been charged at all. The trial is a farce.

Colion Noir already pointed out that the prosecution revealed they had no idea about firearms and was determined to vilify the hero and demonize him. We have seen how crime and violence prevails in Democrat States because of the liberal ideology that is trying to destroy America and to teach kids to hate America and the freedom it represents. That whole year of ANTIFA hate and violence the media promoted was shameful. ANTIFA built the Berlin Wall.

My son is a musician. Years ago he got a paid gig with the Abbotsford Youth Symphony. I spoke with another father at a concert who said he was from Chicago. He said during the Chicago riots, they all got their guns and lined up outside their homes. They told the rioters, if they come into their neighbourhood, they will shoot them dead. As a result, the rioters left them alone.

Obviously, Canada is very different. Our guns are not for self-defence. They are just for target shooting like in Switzerland. It's a good skill to have if we are forced to go to war but the American model of firearms for self-defence is very different. Yet during riots and looting, one cannot dispute the effectiveness of the right to bear arms to protect people and property.

In Canada we have the right to physically fight the looters like Curtis Sliwa did in New York. Noncooperation with evil is as much a moral obligation as is cooperation with good.

In the aftermath of the Minneapolis riots, there was a photo of four armed patriots standing shoulder to shoulder to protect the local businesses from vandalism and theft. They were two white men and two black men. The media intentionally edited the photo and maliciously misrepresented it. They cut out the two black men from the picture and said it was two white men ready to shoot black rioters. For over a year the media tried to create hate and division.

That is why we have to reject their absurd agenda by defending the constitution and the freedom it protects. Letting rioters burn and steal is an act of civil war. Lead, follow or get out of the way. 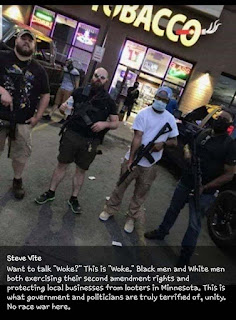