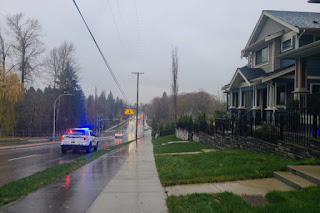 CTV is reporitng that "Mounties in Surrey say they're looking for multiple suspects after a man was shot in a driveway Thursday. Police said the shooting, which happened at a house on 160 Street north of 28 Avenue, was reported to them at about noon. A man was taken to hospital with non-life-threatening injuries. Mounties said the suspects left the area in a white SUV that may have Washington licence plates."

"The investigation is in very early stages and the motive is not known," the RCMP said in a news release. "Based on initial information the shooting does not appear to have any connection to the lower mainland gang conflict."

AYFKM? If these investigators had half a brain they'd be dangerous. It's not related to the gang conflict because it wasn't one of their guys in the witness protection program. GMAFB. The motive is not known so you don't know what it was about. He was shot in front of the home.