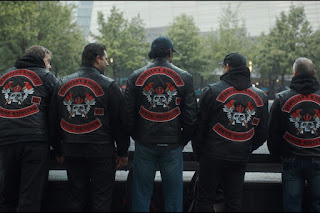 The day after that the Burnaby Now reported that "Florian's Knights, a new film about a controversial firefighters biker club started in Burnaby, says the city fired co-founder Nick Elmes and then settled with him, allowing him to retire with no disciplinary record."

There are a lot of things I'd like to say about this but I'm under a gag order and am not legally allowed to do so. However, I will say this is bullsh*t. I wrote about this in 2018. Dr Spin and the Compromised CFSEU. Sounds a lot like Dr Spin and Andy Richards' Cop Pot company that got Weird Hal stripped - it's a conflict of interest. The CFSEU don't make drug busts. They just like to harass people in nightclubs or on motorcycle runs so they feel important.

The CFSEU don't give a rat's a*s about the Hells Angels drug trafficking out of Shakerz or the guys they have at the Dell bowling alley supplying the runners. They don't do a f*cking thing about that. Instead, they get a fireman fired and a non-drug dealing MC disbanded. Well done ya pathetic losers. The scam once again goes all the way to Public Safety Minister Mike Farnworth.

Does Mike Farnworth care about the drug traficking out of Shakerz? Evidently not.