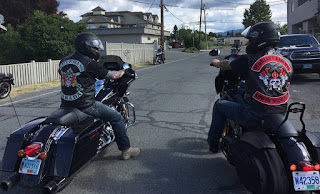 People have been asking me my opinion about the new firefighters MC called Florian's Knights. I don't have a problem with them. If the firefighters want to form an MC then let them. What concerns me is the smoke and mirror drama objecting to them.

The police are concerned and when the dust of their frenzy settles the root of the problem is revealed. Normally the Hells Angels form puppet clubs like the Zig Zag crew to sell drugs. When one puppet club gets busted they quickly form another. However, it is highly unlikely that firemen will sell drugs for the Hells Angels. Entirely possible but highly likely.

Nevertheless, members of the Veterens MC in Langford have been busted for drug trafficking. That is concerning. Locally we have the Shadow club right beside Gus' shop and the Jesters on Scott Road near the Park and Ride. Neither groups have been busted for drug trafficking yet. The Shadow club has a cool logo, the Jesters do not. Their logo is a bit juvenile.

I find it highly suspicious that the police would send out press releases sounding the alarm about the founder of Florian's Knights posing with members of the Hells Angels when at the same time the police watch the drug trafficking out of Shakerz and on the Surrey Strip. Why would they watch drug dealers sell fentanyl on the Surrey Strip without arresting them but cry the blues when a fireman poses with someone who knows someone who was involved with someone who once sold drugs. It's far too hypocritical for me to stomach. It's as though they are trying to convince the public they are targeting street level drug trafficking when in fact they aren't.

It's like the Teamsters Horsemen. I don't have a problem with them. I respect them and what they do. Did they have permission from the Hells Angels to form? Of course they did. That doesn't mean they sell drugs for them. When the police obsesse over eliminating all MCs while they ignore and promote drug trafficking, I am forced to ask why?