Unprotected: The failure of the Witness Protection Program 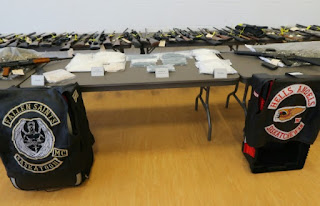 CBC is reporting that "Noel Harder risked his life as a secret police agent, then spent three years testifying as the star witness against drug dealers, gun runners, mobsters and the Hells Angels. Today he’s a marked man with an apparent $2-million bounty on his head. And he’s on his own. The RCMP kicked Harder out of the federal Witness Protection Program last month and, by his account, reneged on one promise after another.'

We have heard this all before. The CBC previously reported that a Woman in the witness protection program sued the RCMP for negligence. In that case the woman found out that the police were the ones that leaked her identity on purpose to force her into the Witness Protection Program so she would testify for them. That was not the first time that happened.

If you want to leave the, life just leave. Don't testify and don't become a police informant. It's just not worth it. I tell people if you testify, I can't protect you the police have to. But I warn people if they testify, the police won't protect them forever. Eventually they will leave the program with nothing. Think about it. You have a new name and a new identity. How are you going to get a job without any job references? How are you going to go back to school without a transcript?

In the recent Gang forum sponsored by SAFA, Andrew Bacchus said when he left the life, he didn't have any problems with his gang. He was a drug dealer. When he stopped selling drugs that opened up more territory that other dealers wanted so it wasn't a problem. Them worrying about him testifying wasn't even a consideration. There was no need for him to do that.

At the Gang forum there was a cop from the gang exit program. He said that whe he starts working with gang members there is a huge wall to break down. He tells them he is willing to help people leave the life without getting information from them. That is the exact opposite of what all the other cops do. If that is true, that would be a good thing.

For all those who have been screwed over by the witness protection program, the best thing to do is use your old transcript and job references. Just tell them you did a legal name change because of a stalker which is not entirely untrue. For those of you considering the program, don't.