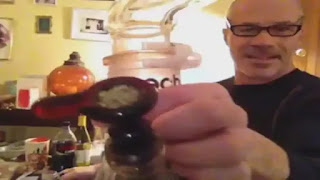 The Peace arch News is reporting that "A Victoria man is facing nine recommended charges from the Victoria Police after officers took him into custody during an investigation into the sale of illegal drugs, including fentanyl. The VicPD Strike Force and Crime Reduction Unit officers went to the 700-block of Johnson Street after hearing of man operating a “dial-a-dope” operation. After several days of investigation, officers believed the man was making hand-to-hand drug transactions. When officers used a search warrant on March 21, they took one man into custody and found drugs including heroin, fentanyl and cocaine. They also found over $12,000 in cash, body armour, a shotgun and ammunition."

Imagine that. The Victoria PD observe hand-to-hand drug transactions on the street and get a search warrant which resulted in a fentanyl bust. That's how it's supposed to be done.

CBC is reporting that "A Winnipeg man previously convicted of running a pot delivery service has been handed a 10-year sentence in Manitoba's first case of fentanyl importation." Winnipeg impliments a 10 year sentence for a fentanyl dealer but Surrey RCMP won't even make a bust when they watch it happen on the Surrey Strip. What's wrong with this picture?

Salt that has lost it's flavor is good for nothing. Kinda like the police who won't enforce the law.

I will admit that I am astounded at how the BC NDP has cleaned up the Surrey strip. They provided housing for the homeless and the police moved them on. Problem solved. That was in everyone's best interest. It will require a consistent police presence to maintain but this is a big step forward. The people spoke and the NDP listened when the BC Liberals refused.

Now we just need to start zoning for rental units and Surrey will be great.