Burning car with body inside found in Mississauga 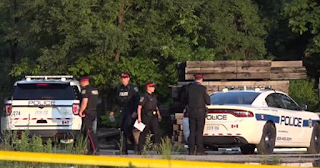 CP 24 is reporting that "A man has been detained after emergency crews found a burning car with a body inside in an open lot in Mississauga on Sunday evening. Peel Regional Police say they were called to a field near some woods in the area of Dixie Road and Lakeshore Road East at 6:50 p.m. for a fire. Crews arrived to find a vehicle fully engulfed in flames. Once firefighters doused the flames a deceased person was found inside the car. The identity of the deceased was not released. Police say they are treating the incident as a suspicious death. One man was detained in connection with the incident and he was interviewed by detectives."