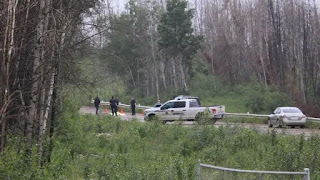 VOCM is reporting that "Wood Buffalo RCMP in Alberta confirm a Newfoundlander found dead on a road in Fort McMurray early Wednesday morning was the victim of homicide. The body of 36-year-old John Bradley Healey of Clarenville was found on an access road between Greyling Crescent and Abasand Drive around 5:40 a.m. Wednesday morning. An autopsy confirmed that Healey was the victim of homicide, and police believe his death was not a random act."

February 2016 he was charged with pointing a loaded shotgun at random cars on the highway. Sources claim he was found in possesion of drugs for the purpose of trafficking when he was pulled over and cut a deal turning in his suppliers. Fort Mac is pretty much red and white.