Tom Gill is is part of the problem 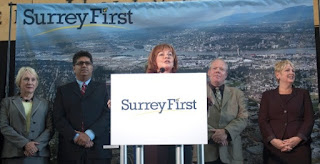 Without question Surrey First has been Surrey's Worst when it comes to fiscal responsibility. Their motto has been tax and spend, spend, spend. Linda Hepner is at the lowest approval rating ever and is not running for reelection. After her pal Mayor Moonbean was defeated as Chair of Translink, she decided not to run for her position there as well. Linda Hepner and Gregor Robertson from the Mayor's Glutton council have been icons promoting the Translink tax and spend fraud and the public has had enough. Tom Gill has supported Linda Hepner all the way.

During the controversial Mega Casino vote in south Surrey when Dianne Watts choked at overwhelming public opposition, Tom Gill was defiant and supported the project despite the objections of everyone there and the entire Sikh community.

During the money laundering at Campbell Heights, steam rolling over public outcry over Hawthorne park and Clayton Heights, Tom Gill was there defying the public will.

When the local businesses and residents called for a crack down on the public drug dealing on the Surrey strip Linda Hepner did the opposite and opened up a safe inhalation site for addicts to smoke crack before they rob the local businesses. Tom Gill was there.

Tom Gill was also there during that fraudulent rebuild of the new parking lot at Surrey Memorial Hospital. Misappropriation of health care dollars is obscene. Surrey First has been Surrey's worst.

"SNC-Lavalin has done more to bring Canadian engineering into disrepute than any company has ever had the misfortune to do in the history of Canada,” Mayor Derek Corrigan said at a January 13, 2014, city council meeting. “This is one of the few Canadian companies who could attain the high goal of being banned for 10 years by the World Bank for corruption. This is a company that is up to its earlobes in corruption in Montreal.”

Posted by Dennis Watson at 2:40 AM