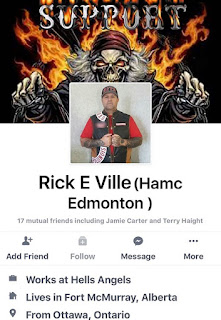 The Edmonton Sun is reporting that "A patched Tribal motorcycle gang member shot his steroid supplier in the face as a way to ingratiate himself to the Hells Angels after the dealer got on the bad side of the notorious outlaw biker gang, a judge ruled Friday." Sounds like a complete loser.

The Edmonton HAs are dirty as f*ck just like the EPS. In 2016 we reported that an Ontario Village Idiot named Rick Levesque transferred to the Edmonton chapter after the Ontario Nomads were disbanded by Quebec. He was the put in charge of the Tribal MC's drug dealing in Fort Mac.