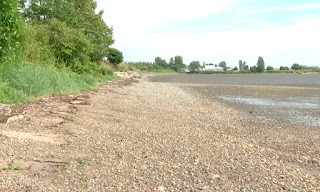 Global is reporting that "A French teen who accidentally crossed the U.S. border while jogging on a beach in White Rock, B.C. is back in France after spending two weeks in a U.S. Immigration and Customs Enforcement (ICE) detention centre."

Her family was having a picnic on Whiterock beach during the Victoria Day long weekend. She went for a jog along the beach and unknowingly crossed the border because it was unmarked. Instead of sending her on her way, the border agents detained her for two weeks. That is insane. The United States is fastly becoming a third world country when it comes to human rights.

CBC posted a picture of the site. It is not marked. Detaining her at all was unlawful not to mention for two weeks. The US Constitution, like the Canadian Charter of Rights, guarantees certain unalienable rights. Oath Breakers claim the US Constitution is just for US Citizens but it does not say that. The Constitution says no state shall deny to any person within it's jurisdiction, equal protection of the law. The law states no one can be arrested without being charged with an offense. The law states that if charged with an offense you have the right to a fair and speedy trail and you have the right to legal representation. All of these fundamental rights are denied at the border so why on earth would I want to visit there?

As a Canadian I get treated better in Russia or China than at the US border. So what happened? Who trampled on the American flag? Civil servants in the United States swear an oath to defend the Constitution from all enemies both foreign and domestic. Every American citizen pledges allegiance to the flag and the free republic for which it stands. That free republic is defined by the US Constitution. As Martin Luther King pointed out, if they do not honour it, what good is it? How does that promote tourism? I rather visit somewhere else. Just say'n. 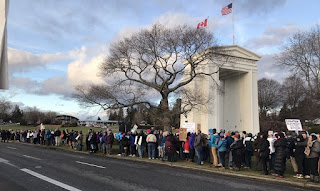 At Peace Arch Park the border is well marked. Even then you are allowed to cross the line and return again without getting arrested. It's a park. As long as you don't go past customs you're fine. This girl did not go past customs and it was not marked. The border patrol was totally out of line trying to justify their existence. ICE are freaking Nazis.