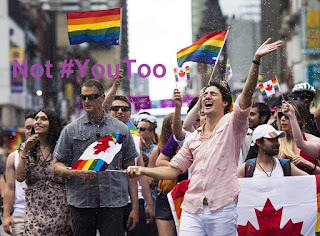 I am a bit cynical about the hype and sensationalism of the #MeToo movement. Sexual assault is nothing to minimize or joke about. It's just that grabbing an ass, as tacky and inappropriate it may be is completely different than rape. Rape is heinous. Grabbing an ass is stupid. I work in the private sector. Unlike at the RCMP, we regularly get sexual harassment training.

Years ago, when we first started getting the training, a young man spoke up. "OK so consensual advances are fine, it's only bad if it's not consensual. How do you know if it's consequential if you don't ask? It's kind of a crap shoot then isn't it?" We all had a chuckle, I could see his point. The problem is, some people don't know where to draw the line or at least they refuse to do so.

So now we hear groping allegations against Justin Trudeau the fallen demigod.

Seemingly when he was a teacher in BC he got drunk at a Kokanee Summer Festival and groped a reporter. She did not consent. Advance ended. He then apologized and said “I’m sorry. If I had known you were reporting for a national paper I would never have been so forward.” I see.

When Justin Trudeau was first elected he looked like a real laddie's man. Now he just looks femmie. Not that there's anything wrong with that. I'm just saying he has lost his luster and his popularity is starting to nosedive. Aside from his asault on religious freedom and his inability to grasp that unnecessary debt is bad, I liked him. He was a lot more personable than Stephen Harper, which unfortunately isn't saying much. Stephen Harper was the Antichrist.

The question we need to ask is what next? Does Canada take another jump to the left and legalize all drugs or does it take a step to the right and restore balance to the force?

Time will tell. It always does. I do not support the legalization of all drugs.

Update, CBC is reporting that the woman who filed the complaint confirms that the incident did happen, and just wants to be left alone.