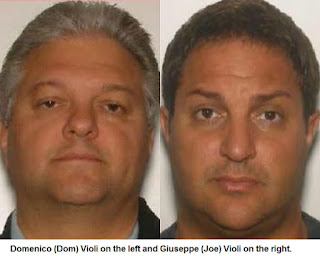 The Montreal Gazzette is reporting that "The son of murdered Montreal Mafia boss Paolo Violi has been sentenced to a 16-year prison term for drug trafficking. According to the Toronto Star, Giuseppe (Joe) Violi, who lived in Hamilton, was sentenced Friday for trafficking fentanyl and cocaine. Violi was reportedly arrested in an extensive investigation into drug trades across southwestern Ontario and New York. His older brother, Domenico Paolo Violi, has also been charged, but is yet to stand trial."

"According to the agreed statement of facts, Violi was involved in a scheme to import 200 to 300 kilograms of cocaine into Canada. Paolo Violi was the powerful Calabrian boss of Montreal’s Mafia until he was murdered in 1978 by members of the Rizzuto crime family. Violi’s death cleared the path for the Rizzutos to take control of the Montreal Mafia for decades. After his death, his widow and two sons fled to Hamilton, a region that belongs to the Calabrian Mafia."

The Calabrians of Hamilton were warring with the Rizzutos in Montreal when Vito's Father Nic was shot in his own home by a sniper in front of his family at the age of 86 and when his funeral home was firebombed. Both barbaric acts crossed the line and broke all rules of engagement.

Ralph Natale was right. The new kids on the block have lost their way. The Last Don Standing.