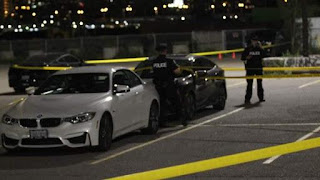 CP24 is reporting that "Police have made an arrest in the shocking daylight shooting of two young sisters at a playground in Scarborough. A suspect, identified as 21-year-old Markham resident Sheldon Eriya, was also arrested in Pickering on Friday. He is charged with seven offences, including two counts of attempted murder."

The Canadian Press is reporting that "Police say a man found with gunshot wounds after gunfire was reported at the Polson Pier entertainment complex on Toronto's waterfront is no longer in life-threatening condition. Police say officers responded to reports of gunfire on Saturday night and shell casings were found in a parking lot. They say the man suffering from gunshot wounds was found about two kilometres from the scene. Officers took the man to hospital for treatment. They say there were reports of multiple gunshots."

CP24 is also reporting that "Police have made an arrest in the murder of a 28-year-old woman who was found dead inside her West Queen West apartment earlier this week. Victoria Selby-Readman was found suffering from obvious signs of trauma inside the fifth-floor apartment that she rented at a building on Richmond Street near Niagara Street on Tuesday evening. In a news release issued on Sunday, police said that they have now arrested a 41-year-old man in connection with her death."