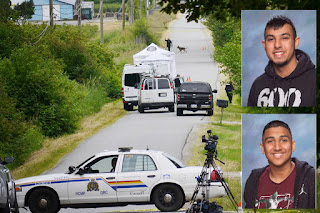 The Peaearch News is reporting that "Integrated Homicide Investigation Team has confirmed two Surrey teenagers are dead, following a late-night shooting in South Surrey’s Campbell Heights neighbourhood that police believe was targeted. 16-year-old Jaskarn (Jason) Singh Jhutty and 17-year-old Jaskaran (Jesse) Singh Bhangal were found dead just after 10:30 p.m. Monday near 192 Street and 40 Avenue. The victims had sustained gunshot wounds and were declared dead at scene. The discovery came less than an hour after Surrey RCMP were alerted to a burning car in the area of 184 Street and 29A Avenue, and just a half hour before police were notified of a second burned car, at 172 Street and 93 Avenue." Highschool students. Tragic.