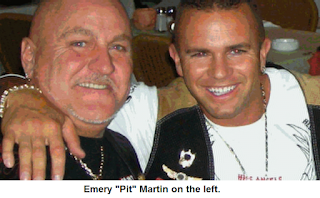 CBC is reporting that "A northwestern New Brunswick man, identified by RCMP as a longtime member of the Hells Angels outlaw motorcycle gang, has become the 15th person to be arrested as part of an investigation into cocaine trafficking in the province. Emery Joseph Martin, 57, of Sainte-Anne-de-Madawaska was arrested Monday in his vehicle on the Trans-Canada Highway, near Rivière-Verte, around 9:30 a.m., Cpl. Jullie Rogers-Marsh said in a statement. Martin, known by the nickname Pit, appeared in Bathurst provincial court later in the day to face 10 drug-related charges" including cocaine trafficking.

April 24th CBC reported that "In Quebec, police arrested at least 63 people on Tuesday, seizing cocaine, methamphetamine pills, firearms and $2.5 million in cash. Lapointe estimated the three large drug rings in Quebec have done about $10 million worth of business in the last eight months." The Hells Angels has a "monopoly" on cocaine and synthetic drug sales in Quebec.

Also in the News: Harley-Davidson's decision to shift some motorcycle production overseas because of tariffs it's facing in a trade dispute between the U.S. and the European Union.