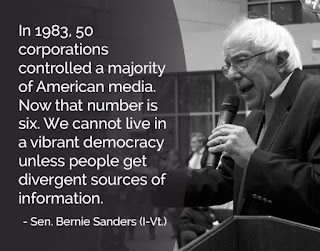 The grip of the Corporate Media Monopoly continues to tighten as Post Media News continues to slash and burn the industry. CBC is reporting that "Postmedia says it is closing down six community newspapers in Ontario and Alberta, and halting the print editions at three other papers in Manitoba and Ontario as it moves" to kill competition.

If they weren't so determined to kill their credibility, the industry would prosper. All they do is buyout news outlets and shut them down to maintain a monopoly on their corporate spin. Mark my word, there is a market for real news. The private sector can fill that void.

The Globe and Mail is reporting that "Black Press Group Inc. will begin printing the Calgary Sun newspaper this summer under an outsourcing agreement with Toronto-based Postmedia Network Inc., which will eliminate 52 positions as a result.

In May 2002 Fair dot org reported that: "A dispute between Canada’s largest media company and its journalists has put media concentration on the political agenda as seldom before. In January, organizations representing journalists across Canada called for a parliamentary inquiry into media concentration, especially at CanWest Global Communications. The Canadian Association of Journalists (CAJ) and the Quebec Federation of Professional Journalists (QFPJ) denounced actions of the media giant as a disturbing pattern of censorship and repression of dissenting views.” Post media News acquired Canwest July 2010. That made the bad situation worse.

It was really bad when Conrad Black was buying up all the news outlets and firing anyone that printed a labour friendly story. Now it is much worse.