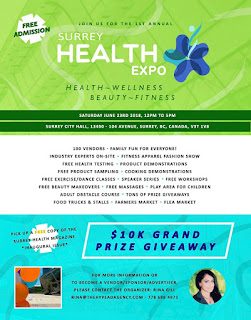 Rina Gill organized a Surrey Health Expo today at City hall. It was like a trade show highlighting local business in the health, wellness, beauty and fitness industry. I can relate to three out of four. It was actually well done. The first booth that caught my eye was Paul Nijar from the yoga dojo. 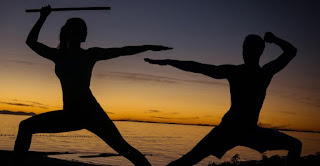 Paul is local and has written several books. One is called Yoga Warrior. I looked at the cover of the book, then I looked at him and the guy beside him and I said, normally we would consider yoga warrior to be an oxymoron but you guys could sell this. You guys look pretty buff. What's this all about? Paul introduces himself and explains how he has merged yoga with the martial arts to develop the indomitable spirit of a warrior within. I'm like did you just say indomitable spirit? He seems like he's onto something. His dojo is at 12682 82 Avenue in Surrey.

The guy beside him was Rob Yun a buff local entrepreneur who has organized MMA cards in the past. Today he is representing Vitapro21. They have a hang over health drink called When. It's kind of a funny idea but when you read the ingredients, it's loaded with healthy stuff. Hey is that him with Scotty Mac? I know that guy. I used to work with him. I just saw him today at the gym.

Next was a group called Creep Hunters Canada Society launching a new web site No Excuse for Abuse. I asked if they were affiliated with Creep Catchers and he said no. I said you don't sell drugs like Ryan? No we don't sell drugs he said. He sounded like a good guy. He rightfully said a lot of time domestic violence doesn't get reported.

On that note there was a group there called Moving forward Family Services that offers affordable counselling. Another group called Bounceback Today which is a branch of the Canadian Mental Health Association which helps people overcome anxiety and depression.

Representatives from a new boxing and weight gym opening up in Surrey called LV Fit were there. There was also a father there who had lost a child so Sudden Infant Death Syndrome organizing a walk to raise awareness for SIDS in memory of his son, Azaan Singh Gill. It will be held on the track at North Surrey Secondary August 19th 11 AM to 3 PM.

The 3 E Organization is about Engaging and Enabling Opportunities to Empower and Connect for the betterment of communities and especially focusing on women and youth in the mosaic community. Those are some of the booths that caught my eye. All in all a sucessful event. Since it was the first annual Surrey Health Expo we hope to see more just like it.

Posted by Dennis Watson at 5:54 PM