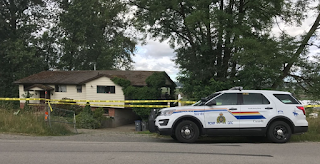 The Daily Hive is reporting that "Surrey RCMP is warning the public of an investigation involving an assault with a weapon and shooting that occurred overnight. At approximately 11:26 pm on June 25, police responded to several calls from residents who reported hearing gunshots. Officers attended the scene and located an injured woman who had been assaulted and a man who was suffering from a gunshot wound inside of a residence. Both victims were taken to hospital. According to police, the suspect fled the scene before authorities arrived. Police believe this was a targetted incident and the victims were known to police. Police also say the victims and suspect are believed to be known to one another."

The Peace Arch News is reporting that "This is the third reported shooting in Cloverdale since Saturday, bringing the city’s shots-fired tally to 25 for 2018."

BC TV is reporting that "Police and fire crews responded to this torched van in a rural area of Langley on June 26, 2018." It may or may not have been related to the shooting. 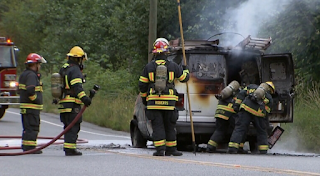