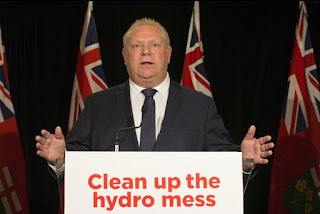 Ontario just elected Doug Ford. I supported Christine Elliott. Doug Ford promised to clean up the Hydro mess. How's he goign to do that? By privatizing it? That is what caused the problem in the first place just like Enron. He promised a drastic reduction in the price of hydro and gasoline. How's he going to do that? By nationalizing the oil?

Privatizing Hydro has always been a source of problems. That is what caused the BC Hydro tsunami of deferred debt. Private companies are mandated to make a profit. Gordon Campbell privatized the power brokers that sell power to the public company at above market rates. As Norm Farrell pointed out, independent power producers have overcharged tax payers almost $5 billion above market value since 2004. Enron was a national disaster.

The Toronto Star reported that "Why have hydro bills in Ontario doubled? Why is electricity more than double Manitoba’s rate and almost double Quebec’s rates? It’s not a mystery. Hydro deregulation, an Enron designed electricity market and a 'for profit' electricity system is the real reason for ballooning hydro bills." Mike Harris started the problem. Kathleen Wynne finished it.