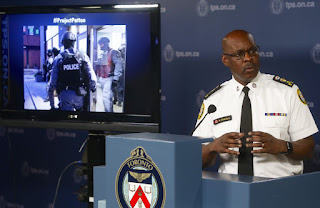 The Toronto Sun is reporting that "Toronto Police Chief Mark Saunders reveals details of Project Patton, an operation that targeted a notorious street gang known as the Five Point Generalz and saw hundreds of cops conduct pre-dawn raids across the GTA on Thursday, June 21, 2018."

The Rap dictionary claims that "The 5PGz first gained notoriety after one of its members was implicated in the shooting death of 11-year-old Ephriam Brown who was caught between what police describe as a gun fight between two rivals." One has to wonder if they were involved in the recent playground shooting in Toronto where two young girls were also shot in the crossfire.

Toronto is doing someone about gang violence. Why isn't BC?