The Struggle Between Good and Evil 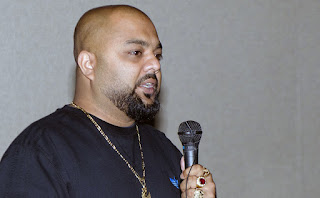 I attended a gang forum at Surrey City Hall last night organized by Rina Gill on behalf of the South Asian Family Association (SAFA). The day before, a rally of over a thousand concerned citizens and community groups called out for City Hall to wake up and do something about the gang violence. The next day, SAFA did something and sponsored the event which was planned in March before the two recent high school murders.

Andrew Bacchus, a former gang member from Toronto was the key note speaker. It was well done and Andrew gave an inspiring and heartfelt presentation. Andrew grew up in a rough area of Toronto and began selling pot at age 11 then started selling crack at age 14. When he got older and had a child he decided to leave the life. He gave up making a couple thousand dollars a night selling crack for a 11 dollar an hour job as a youth worker and hasn't turned back.

A previous Globe and Mail article states "When Andrew Bacchus was a player in the gang world of Toronto's Jane and Finch neighbourhood in the 1990s, there was something of a code: Don't involve women and children in your business. The rare time someone stepped out of line, they were lectured or beaten. And if two men wanted to settle a dispute, they would often set their guns aside and fight it out with their fists. "Because of the respect people had for the 'Game,' they just knew how to conduct themselves," said Mr. Bacchus, who has been a youth worker for the 15 years since he went straight. "Nowadays, all that kind of stuff is out the window."

Andrew was a member of the Vice Lords. For those of you who don't understand what that was I shall explain. When I was working with the Guardian Angels in south Seattle we were dealing with the Crips and the Bloods networking up from LA while coming from Chicago we were dealing with the Black Gangster Disciples and the Vice Lords. Two rival gangs who didn't wear opposing colours, they just broke their leather hat on different sides of their head.

Andrew sounds like he's from Brooklyn. Not the slang but the tone. He's calm, humble yet confident. He's from the hood. He's not from the Bacon brother's Suburban princess's crib.

Suki Grewal is a founder of SAFA the group that sponsored the event. She is a genuine, nice person that has volunteered her time for many years. Rina Gill helped plan the event. She's also a nice person. Neither Suki or Rina are confrontational. They are just genuine people who gravitate to people who do good. Last year Rina ran for city counsel beside Doug McCallum on the Safe Surrey slate. She missed being elected by one seat. As time has shown, Rina would have been the better choice. Let's hope she runs again this time to save us from Surrey's worst.

During last night's event they played a video clip from the Mayor, Linda Hepner. It was offensive. It must be painful for her to speak through all that Botox. It is certainly painful to listen to and to watch. Linda Hepner is dripping with arrogance and dishonesty. Was she not present the night before to hear the thousand concerned citizens calling her out for her inaction? No she was not. The NDP MLAs were there but she was not. She spent the whole video telling everyone how wonderful she is and what a great job they are doing without listening to a word that the people have said. I don't want to take us to a dark place, but we're already there.

Killing kids in high school has crossed the line just like the Surrey Six did. In BC youth gangs aren't a problem any more like they were 30 years ago. There are no real gangs in BC any more. Now there's just drug trafficking networks and they are mostly all run by the Hells Angels. Hells Angels drug dealing rivals are quickly eliminated in Surrey. In BC you get killed for two reasons: you have a drug debt or you're a rival drug dealer. It's that simple. Promoting drug addiction is not the answer. Selling drugs in treatment centres is not the answer. Arresting drug dealers that sell fentanyl is. It's that simple. Providing drug dealers police protection on the Surrey strip is the problem and Linda Hepner is at the root of it. We changed the Surrey police chief. He is a good guy. His hands are tied by Linda Hepner. Now we need to change her and Surrey's Worst. 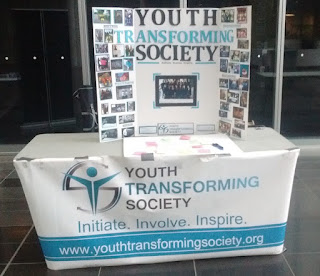 A university student and a high school student from Youth Transforming Society took centre stage durring the gang forum. It's a nonprofit group that encourages youth to volunteer their time.