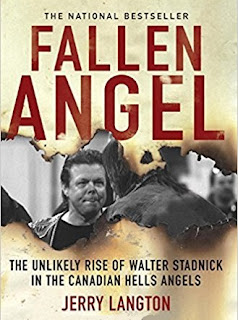 A lot of people with credibility talk about what it was like to be old school back in the day. When others without credibility echo the same sentiments, I get suspicious. I have stated my position on Walter Stadnick quite clearly. My position has not changed. I don't like him and I don't trust him.

George Christie and Ralph Natale were old school. Wally Stadnick was not. As I said before, Walter Stadnick is not from Quebec. He is an Anglophobe from Hamilton. Jerry Langton is a credible journalist from Hamilton who went on to New York City. He wrote a book called Fallen Angel: The Unlikely Rise of Walter Stadnick. Why do you think he states the unlikely rise? Wally was a 5' 4" weasel with small man syndrome who sucked up to Mom Boucher. He rose to power because he was a relentless backstabbing politician.

Before I left Facebook, Michael Green made a post supporting Walter Stadnick. Tony B was quick to say thanks Micheal. I didn't out Tony, he did that himself. Now he is lying and claims that he is a *former* Hells Angel from the US living in Canada to throw people off. He's quick to brag about his *former* affiliations with the Hells Angels and his pal Mom Boucher but all of a sudden he doesn't want people to know who he is. Nobody in TBM wants to kill him. They've all left the life. Nobody in the game wants to kill him either because they simply don't care about him.

In my opinion he hasn't left the life. When he trashes the current members of the Hells Angels in Quebec, he isn't talking about what George Christie and Ralph Natale are talking about. Wally is talking about the new generation that hates Mom Boucher and the fact that he was an armed rapist. That is what Wally is referring to. Walter Stanick is in Montreal hiding behind Salvatore to help Mom Boucher get back in the game. He's not there to promote old school values.

Tony B already successfully poisoned Michel against the Rock Machine. Now he wants to use Micheal to help promote Mom Boucher. Little T's new name is Poison Ivy because he's a little girl and every word that comes out of his mouth is a lie. Go back to Ontario where you belong. Quebec doesn't like you because they don't respect you - for good reason.

Posted by Dennis Watson at 5:54 PM