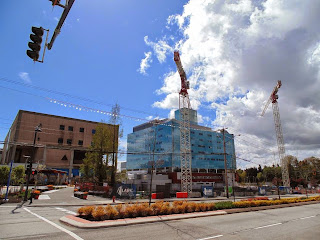 This is the epitome of stupidity. I'm driving by the Surrey Memorial Hospital today and I notice two new huge holes out front each with a new crane in them. Normally this is nothing new since Surrey is growing and they have been doing construction at that hospital for quite some time now. However, as soon as I look at it I notice that something just isn't right.

I scan the scene and say where on earth is that new parkade they just built? Then I focus in on the two holes and to my amazement the two new holes are exactly where the new multi level parking lot was they just built. That is insane. I ask around and read the sign out front only to discover they tore down the new parking lot to build another one. That is fiscally irresponsible. 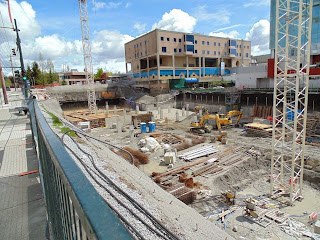 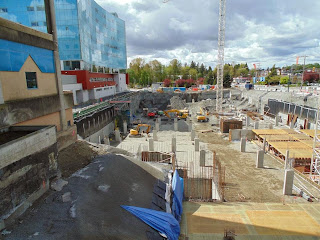 The above three pictures are what it looks like now and the next three are from Google Street view which shows the huge parkade they just built that they just tore down. I remember it well because when they first built it we were all mildly synical of how it was such a typical capitalist thing to do. Build a big parking lot to charge customers instead of building more hospital space. 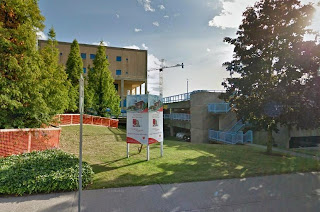 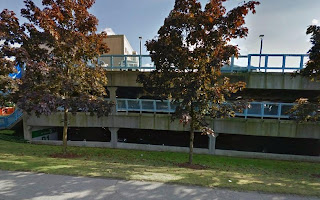 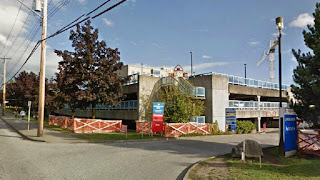 Tearing down a new multi level parkade they just built only to build another parking lot is fiscally irresponsible. My concern has nothing to do with leftist ideals. This is a right wing, capitalist, make money save taxes concern. What they have done is not right wing. What they did was a shoot yourself in the foot waste of tax dollars. I asked why they tore down a new parking lot only to build another one and one lady said so they can't hire any more doctors. Indeed.

It's just like spending all that money upgrading the current City Hall in the perfect location for business only to throw it away and create this grossly extravagant ivory tower in the City Centre that we don't need. Evidently Dianne Watts did build that incinerator in Surrey after all. Only it doesn't burn garbage, it just burns tax dollars. The rest of the country need to understand what kind of fiscal disaster Dianne Watts has created in Surrey before she enters federal politics and spreads that fiscally irresponsible plague across the country. Buyer Beware. 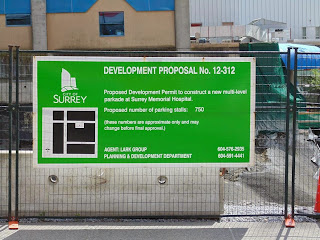