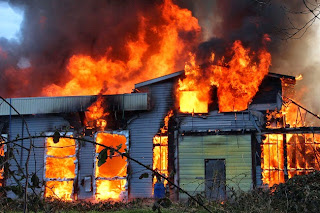 Global is reporting that there was a large barn fire in Surrey yesterday morning that contained a legal grow op. In the printed article it states the owner was collecting $6,000 a month rent from the grow and when he asked for an increase they got angry and turned him down. The day before they were supposed to hand over the keys the barn burned down after the product was harvested.

A blog reader who sent me the story claims they saw the live broadcast on Global. They claimed that in the broadcast they saw, the owner outright said the Legal Medicinal Grow was run by the Hells Angels. That part was omitted from the printed version. May of last year the police busted four grow ops in Mission tied to the Hells Angels. Yo bro I aint making this sh*t up.

The online video admits that in Kelowna last year police raided 7 legal grow ops where Outlaw Motorcycle gear was found. Guess what. There's only one OMG in BC. The online video shows the owner stating the tenants who ran the legal grow said they have Hells Angels behind them.