Privatized Prisons and the US Incarceration Rate 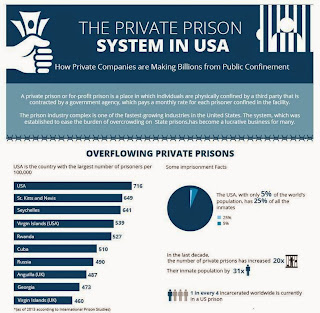 Someone sent in a link to a very interesting graphic about the US incarceration rate and how that has increased with the introduction of privatized prisons. It's actually quite disturbing.

The United States has the highest prison incarceration rate per capita compared to any other country in the world. That is not a good model. Especially for the "free world." Part of the problem is the introduction of privatized prisons that are mandated to make a profit at taxpayers expense. Privatized prisons are a huge conflict of interest.

Some people interpret these statistics to mean the war on drugs is wrong. I disagree. The war on drugs isn't wrong. It's just that the CIA is on the wrong side of that war. I don't think 30 year prison sentences for nonviolent crime are the answer either. 3 months for selling not using crack is not excessive. 6 months for a second offense and a year for a third offense is not excessive. It is fair and reasonable.

The US has a program called three strikes and you're out. Although the US incarceration rate is not a positive model to follow, the Canadian model is on the opposite extreme when dealing with prolific offenders. The more crime a prolific offender commits in Canada the less time they serve in prison. The judges here have it completely backwards. The VPD launched a campaign called 30 strikes and your out. The sad thing is, they weren't kidding. Without going from one extreme to the other, this needs to change.