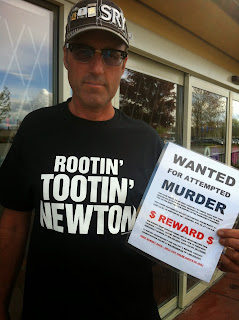 There are a medley of stories to catch up on but I want to pause on this recent stabbing in Surrey. Don Pitcairn from the White Rock Sun is reporting that his nephew was stabbed at a house party in Newton over the weekend. As soon as anyone says Surrey house party everyone tends to roll their eyes. Yet the circumstances of the assault are very disturbing.

The kid tried to break up a fight and was stabbed in the chest. He booked it for the door and four pieces of Surrey White Trash stabbed him in the back seven times and all gave him the boots in the front yard before they stole his wallet and cell phone. That is outrageous. One can understand that someone could get accidentally stabbed while trying to break up a fight but chasing him down, stabbing him repeatedly in the back then swarming him and give him the boots before stealing his wallet and cell phone. That is low life dirt bag.

What's even more disturbing is that Don has been putting up wanted posters trying to find the suspects who assault his nephew. Not that there's anything wrong with him doing that because there most certainly isn't. What's disturbing is that he has to do that and the suspects aren't already in custody. People at the party know who they were. Even if they were uninvited guests, people have iphones to take pictures and word gets around. People there would have heard by now who it was.

In Don's article he mentions the archaic code of silence thing and the grossly misused term rat. Let me be clear. Anyone who swarms someone and stabs them in the back are the rats not the people who tell the family or the police who did it. People who know who did it and aren't saying anything are the rats. That's all there is to it.

If you know who did it, tell me. I ain't the po po. If the police have a name then the victim can id them and you don't have to testify. This is really important. We can't let this kind of thing happen without doing anything about it. It diminishes all of us. This is not the way we roll in Surrey. That is Surrey trash mentally and it's fine time to take out the trash.