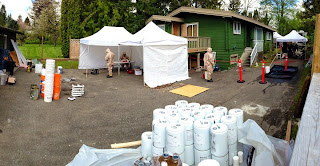 Global is reporting that the Surrey RCMP drug section searched a property in the 20600 block of 72nd Avenue in Langley yesterday. A 36-year-old Surrey resident was arrested and has since been released until the drug related charges have been approved.

It doesn't say what drugs they found or were looking for but the name of their picture says meth lab which would explain why they are wearing hazmat clothing. Crystal meth is nasty. They make it with Drano. That was Kerry Ryan Renaud's specialty.

The Peace Arch News is referring to it as a clandestine lab and that the house appeared to be the focus of a large-scale operation. They are also reporting that a storage locker in South Surrey was searched as part of the investigation. No chemicals were found in the storage locker but other items were seized in connection with the investigation into the lab.

The Surrey Now is reporting that it was ecstasy not crystal meth and that National Geographic filmed the raid. Now that the sassafras oil used to make ecstasy has become so hard to get, E is made from a different much more dangerous chemical now called BZP which results in a different product and many more fatalities.