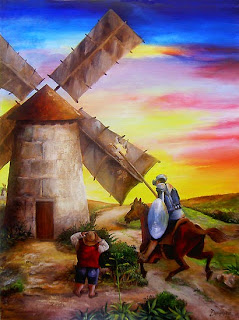 Don Quixote was a fictional character who had these delusions that windmills were monstrous giants and he would charge them like a knight in shining armor thinking he was saving the world from some great evil. The term tilting at Windmills is taken from that novel and means attacking imaginary enemies. Gordon Lightfoot wrote a song about him.

It's rather bizarre when they start sending in their women to spam me with their bullsh*t. You can tell they're women because they are actually intelligent and are trying to appeal to my logic instead of just saying f you agent gay. Yet their appeal concerns me. At this point they are either misinformed or are outright lying. I think it's a little of both.

Years ago Randy Iron's wife and I had a conversation about the Hells Angels. She went on about how the Hells Angels would never be involved with the Pickton Farm. At the time I just agreed to disagree but now there is enough evidence out there to prove that anyone who says that now is simply being dishonest. The Hells Angels had a grow op on site. They were the ones that ran Piggy's Palace not Robert or Dave. Dave Pickton was a Hells Angels associate and knew where the bodies were buried. Robert Pickton was inviting sex trade workers to biker parties on his farm with free booze and free drugs. There's more. Much more.

The number of cocaine convictions tied to the Hells Angels is at this point ridiculous. So please, don't insult my intelligence with all that bullsh*t. It is at this point offensive because it mocks the deaths of people like Bob Roth and Janice Shore. A poor man is better than a liar.