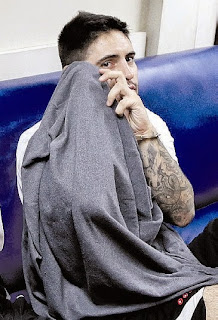 People have been asking if I have heard any news about the James Riach drug bust in the Philippines. I have not. Other than the fact that they are trying to get their search warrant thrown out over claims of an illegal search. However, this article claims the police did in fact get a search warrant. The defense claims they didn't have probable cause to get the search warrant which in my opinion is highly unlikely because they were obviously right.

The civil liberty concern is when the police do warrantless searches. In this case the police did in fact obtain a search warrant. They had to of have had some probable cause because they were right. We know that James Raich is a member of the Independent Soldiers which is a Hells Angels puppet club that sells drugs for the Hells Angels. Spike's other niece was with them in the Philippines and has a child with his co accused. James Riach was with IS member Randy Naicker at the Castle fun Park meeting with the Bacon brothers before the Surrey Six and was in the car when Larry Amero and Jonathon Bacon were shot in Kelowna. There have been unsubstantiated reports that the Mexican cartel has put a hit on them after the bust.